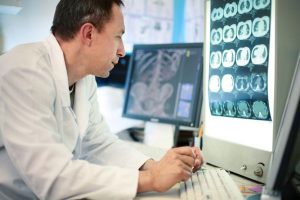 Though radioactive waste is out of scope for these MnTAP webpages, it is important to note that radioactive wastes can and do occur in some hospital and clinical settings, especially in the form of radioactive liquids, capsules, or gases, usually administered in Nuclear Medicine departments. Radioactive materials are typically kept in a “hot lab” and are overseen by a designated Radiation Safety Officer. Nuclear Medicine departments have strict guidelines for personal protective equipment, patient safety, and safe disposal of radioactive waste. Disposal generally includes what is called “decaying,” which means the nuclear waste spends a designated amount of time stored in a lead-lined safety container so that it can “decay.”

Some resources you may want to consult about radioactive waste:

Radiology departments generate waste not typically found elsewhere in healthcare. Though the rise of digital technology in imaging departments has grown to be the norm in Minnesota, there still may be locations that use more traditional forms of imaging technology, including the use of developers, fixers, and films. 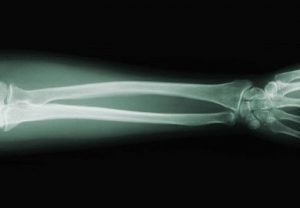 Lead vests occasionally need to be replaced, and the outdated vests must be disposed of. Generally, a universal waste disposal company can accept lead vests for recycling. For more information on lead recycling, visit our healthcare universal waste webpage.